After the conclusion of its first season at the Sugar Shack, Chapel Hill’s LOG (Low Occupancy Gallery) presents Background, Part One of a Mini Series at Lump in Raleigh, NC. Background features works by Lauren Clay, Julia Gartrell and Angelina Gualdoni.

Outputs, maintain time is but the stream I go a-fishin in.

Why did Thoreau live in the woods?
He was inventing a toaster with three slots.

Before the scene can be developed, the background must first exist. Physical movements, screen progressions and gestures toward transitional realms, possess the partitioned space. Split between body and perception, the works included in Background are presented as if on a set. The background is not the beginning but a point in which to move forward while holding intentions to look back. In this moment, the scene’s development is arrested. One work is frozen in frame; another, the frames are layered; the other, frames are in constant construction. Presented within a still set, each work captures a succession of movements through time and body. We wait for what could come next.


Lauren Clay (b. 1982, Mississippi) lives and works in Brooklyn. She recently completed a large site-specific installation for the Brooklyn Academy of Music’s Next Wave Festival. Other solo exhibits include installations at Grounds for Sculpture, NJ, Savannah College of Art and Design, Larissa Goldston Gallery, NY, and Whitespace Gallery, Atlanta. Recent group exhibitions include Monochromatic at Asya Geisberg Gallery, NY, Shroom Show at Helper Gallery, Brooklyn, Drawing for Sculpture at TSA New York, and Quite Fairly Rather at Topless Gallery, New York. Her work has been written about in the New York Times, Bomb Magazine, and Art in America.

Julia Gartrell is a sculptor based in Durham, NC. She received an MFA in Sculpture from the Rhode Island School of Design, and a BA from Kalamazoo College in Michigan. Her work explores Southern lore, Appalachian craft traditions, and material culture. Julia manipulates a variety of found and altered materials in her work, combining contemporary sculptural and traditional craft techniques. She recently finished a year long residency at Arrowmont School of Arts and Crafts in Gatlinburg, Tennessee. She has also participated in residencies at Ox-Bow School of Art in Michigan and Ifitry Artsts' Residency in Morocco. Julia has exhibited nationally and internationally including the Casablanca Biennale, Flux Factory in NYC and extensively in the Midwest and Southeast.

Angelina Gualdoni's works on canvas take the patterns, interiors and abstraction as their main focus, locating the rhythm of the everyday sublime in the language of color field painting. Often staining both sides of the canvas, her paintings operate as fluid scrims between still life, color field and pattern and decoration. Gualdoni's paintings have been the subject of solo and group shows nationally and internationally at the Queens Museum, NY, St. Louis Art Museum, MO, the Museum of Contemporary Art, Chicago, IL, The Aldrich Museum, Connecticut, the Museum de Paviljoens, Netherlands, and the Neuberger Museum, Purchase, NY. Her work resides in the Saatchi Collection, as well as the MCA, Chicago, and the Nerman Museum, Kansas City. She has been the beneficiary of several grants and fellowships, including Artadia, Pollock-Krasner, NYFA (2008, 2015), and has attended residencies at MacDowell Colony, Skowhegan School of Painting and Sculpture, International Studio and Curatorial Program, and Chateau La Napoule. Gualdoni received her BFA from the Maryland Institute College of Art in Baltimore, her MFA from the University of Illinois in Chicago. She resides and works Brooklyn and is represented by Asya Geisberg Gallery in New York. Gualdoni is one of 11 co-curators at an artist-run exhibition space Regina Rex, located in the Lower East Side of Manhattan.


About LOG:
LOG is an experimental art gallery rooted in Chapel Hill, North Carolina. Thriving on the integrated nuances between country and city, public and private, LOG presents exhibitions with artists whose work can fall outside the confines of a pressure driven art market. LOG’s first exhibition space was the Sugar Shack, a rustic structure located on the side of a wooded hill next to Morgan Creek in Chapel Hill, NC. Visitors to the Sugar Shack were encouraged to enter the space in solitude to view each exhibition. LOG occupied the Sugar Shack from September 2015 through July 2016.

To be notified about future LOG exhibitions and events or for more information, please contact Margaret Lanterman at logintolog@gmail.com.
PREV / NEXT   9 / 88
BACK TO PROJECT SPACE 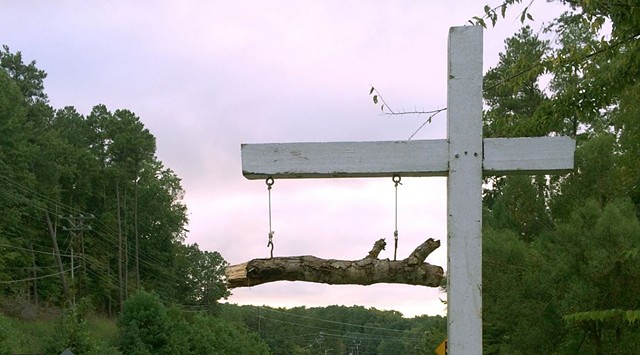