We Are Happy To Serve You
February 2017
Since 1996, Lump has brought rigor and professionalism to the hard driving experimentation and self determination that defined its inception. Lump is now transitioning into a 501(c)3 non profit organization, so that it may continue as a collaborative, artist-focused space with resources to conduct its program without compromise.

Our mission is to expand the possibilities for artists and curators through the support of ambitious projects in exhibition, performance, research and documentation while broadening the community’s exposure to new artistic practices and dialogue. Lump has tasked itself with challenging the public’s notion of art by continuing to embrace its mystique through work by artists whose unconventional visions of contemporary art and life, all too often, go unseen.

JOIN US FOR THE OFFICIAL RELAUNCH - JANUARY 28TH

We Are Happy to Serve You sets off a full month of spectacle as Lump transforms from a grassroots DIY space to a community supported non-profit project space. Founded by Bill Thelen and Med Byrd, Lump began as an artist run gallery in 1996. Over the past twenty years, Bill, Med, and artists of Team Lump have served the NC community providing space for thought-provoking art, while acting as a pipeline for conversation between North Carolina and the larger contemporary art world. This February we celebrate Lump and kickstart the next twenty years with what we believe are required viewings.


CALENDAR OF PERFORMANCES AND EXHIBITS

Worried you can't keep up with all the events? We will email and post specific event information weekly, but only this February.

Bill's Bald Beignets - an installation by George Jenne. Step directly into one of Jenne’s narratives, normally video, scrutinize the detail, fuel up with french donuts and chicory coffee.

Over the course of four hours the audience is invited to interact and direct the performers, essentially creating the performance structure in real time. The audience can choose which instrument or sound score is played; what objects are used or not; what space the performers occupy; and the option to join in and move whenever and however they want. There will be a rule or two for public safety but other than that it will be a (wink, wink) open canvas.


Wednesday, February 8th - February 12th
If Only You Knew - an exhibition featuring works that are typically deemed as voyueristic and unbecoming.

Durham Cinematheque will have a three day residency project : viewed at Lump February 13-15, with a gallery exhibition/open studio in the afternoons and screenings at night. Work by Tom Whiteside and Anna Kipervaser will be featured. Using a wide range of technology including 16mm film, video, magic lantern, and digital projection, "project : viewed" will present experimental film, early cinema, and noncinema both in projection and in close-up modes of viewing. Projectors will be turned inside out.

2. “Counter-Charge” by Alex Hovet (13min, 2015)
In the 1989 adult-oriented computer series, Leisure Suit Larry wanders the jungle of a colonized village searching for love, which he finds, after a multitude of failed romantic interactions, with Passionate Patti, a perfect and unattainable woman. In an act of cathexis, Larry's energies concentrate on Patti in a complex of libido, love, and gender expression that leads Larry/Patti on an investigation of duality. bell hooks' meditations on love and relationships attempt to guide them through text and recordings by an ASMR reader (a phenomenon whereby young women speak in a sexualized, infantilized whisper to elicit a pleasurable response), but these attempts are rejected by the game's instinct. Larry's explorations are anti-cathected--counter-charged--and blocked by his own ego and the constructs of the game in which he wanders, his desires continually repressed.

3. “Head Games” by Brooke Rosen (3min, 2011)
A cameraless film on gender duality and unity, HEAD GAMES is a raw attempt at expressing the inner turmoil inspired by an unbalanced society, and the infinite creative benefits of surrendering to a harmonious, natural state of undefined being.

4. “Her Silent Seeming” by Nazli Dincel (10.5, 2014)
A transcription of what I have been told during intimate experiences while separating from my husband. Sections consist of destroyed originals from Leafless(2011), motifs of the "feminine" alluding to Jack Smith's Flaming Creatures(1963) and of reconstruction of a pomegranate. These decorative objects are re-valued through a controlled act of cutting, with an allusion to synchronization. Obscured images clear out while the hand scratched text becomes harder to read with each section. Direct sound of cuts and hand processing are composed of 26 frame shots. Un-synced, it reveals a hearing of past images, as an act of translation.

5. “Human Body Battleground Organ Organism” by Metrah Pashaee (9min, 2013)
Human Body Battleground Organ Organism is an appropriated moving image collage investigating the penis and vagina as disembodied vessels. By utilizing a digital voice to enact this estrangement, a narration of declaration generates a questioning of definitions, where sound and image structures dismantle and reveal a deconstruction of audio-visual form and subject's signification.

6. “Banquet of Love” by Haruka Mitani & Michael Lyons (7min, 2014)
Insects in their final moments chatter noisily, displaying extravagant colors and patterns - it is their great feast of love. This work was created by Haruka Mitani and Michael Lyons to celebrate the 100th anniversary of Norman McLaren's birth. The film was made by scratching and painting directly on overexposed 8mm film. The soundtrack was created using photosensors connected to an analogue synthesizer.

7. “Before the Portrait” by Karissa Hahn (2min, 2012)
Inspired by John William Waterhouses’ portrait, “A Mermaid” (1901). Portrayal of this immobile creature idealized with images of femininity.

1. “Townhomes Scare Me 1” by Benjamin Edelberg (3min)
Townhomes Scare Me 1 explores my first childhood experience with panic. I attempted to cope with these then foreign feelings of anxiety with a journal of drawings, which I recently rediscovered while visiting my home in Chicago. The title phrase is lifted from one of my journal entries.

2. “Eudora” by Michael Bucuzzo (10min)
"Eudora explores the family home through the eyes of a returning spirit: my grandfather. As a ghost story devoid of characters, Eudora uses its images as a resurrective force to examine the ambiguity of memory and reality, and its further degradation through the act of recollecting."

3. “Light Study” by Josephine Massarella (13min)
Light Study is a poetic examination of the wetlands, forests, and ecosystems of the Canadian Niagara Escarpment. Filmed over a three year period, it explores the unique landscape of the Bruce Trail using 16mm single frame photography. Here, nature presides over an ephemeral human element, its primordial essence both medium and agent of light&#39;s eternal change. Soundtrack composed by Graham Stewart, member of the experimental music collective Viosac.

4. “Hour Between Dog and Wolf” by Abinadi Meza (5min)
This mysterious film brings you between layers of dream-like spaces, guided by an uncanny voice.

6. “(I)FRAME” by Karissa Hahn & Andrew Kim (10min)
A video is a stream of information, and this moving image relies upon the relationship of static frames which are algorithmically determined....
In the language of video compression, the (I) frames are the reference points between which movement is interpolated.
Manual deletion or misplacement of (I) frames results in a video glitch known as a datamosh … the stream of nformation d srupted, d sorgan zed … nterupeted … lost … the ( ) frame removed, rejected … BUT, reclaimed, the (I) frame, the burning bolts of the machine, are at once reasserted in this dance macabre....
(I) FRAME is a mechanical ballet set to the original tempo that characterizes motion on screen at 24 (I) frames a second….
shot at the 2015 DARPA Robotics Challenge in Pomona, CA

7. “The Voice of God” by Bernd Lützeler (9.5min)
If God would come down to earth and try to earn a living in Bombay, most probably he would very soon become successful as a voice over artiste, lending his voice to thousands of hindi movies and even more documentaries and public service films in India. 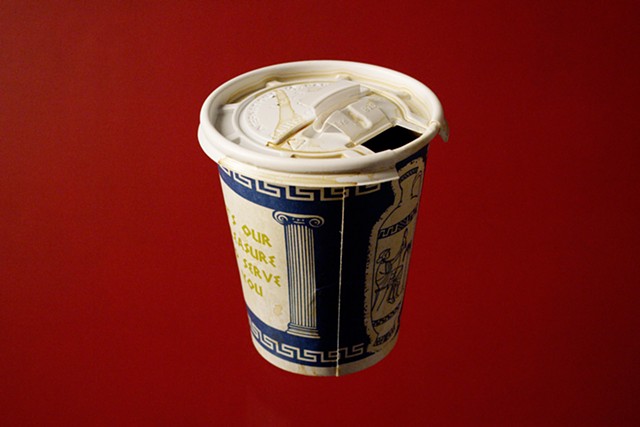